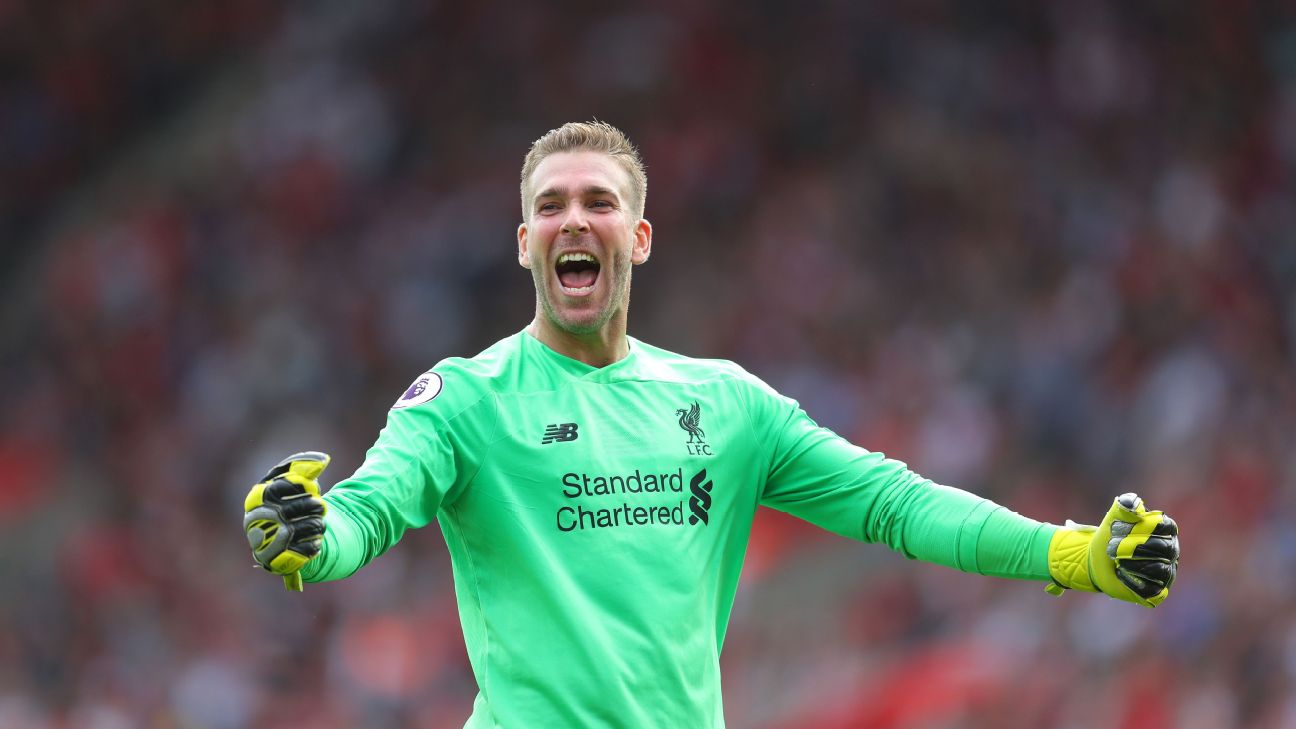 Steve Nicol feels Liverpool's bench could still do with another young, hungry attacker to help out the world class front three. Adrian has been thrown in at the deep end

What could possibly happen next?

Liverpool goalkeeper Adrian wondered that on Monday; a day without training or travel commitments afforded him the chance to catch his breath and reflect on everything that has happened during a "crazy" 14 days, which contained enough incidents -- including an awful gaffe at Southampton -- to cover an entire career.

Has more ever happened to a "backup" goalkeeper in such a short space of time? Instead of the usual spell of settling in, getting to know his teammates and learning the nuances of his new team, Adrian was pressed into action on the season's opening weekend due to Alisson's injury. Since then, he's picked up two league wins and was integral to the Reds' UEFA Super Cup victory, the first major trophy of his career. The stunning start to his time at Anfield has already made him a cult hero.

During the early hours of last Thursday in Istanbul, Adrian stitched himself into the fabric of Liverpool's proud European history. He thwarted Tammy Abraham with a trailing right foot to win the Super Cup against Chelsea 5-4 on penalties, enabling the club to lift a second continental trophy under Jurgen Klopp following June's Champions League triumph.

In that match, the Spaniard squeezed the multiple highs and lows a goalkeeper can experience into a manic 120 minutes. He produced a crucial save at the feet of Mateo Kovacic on 32 minutes, before being beaten by Olivier Giroud's low finish, which skidded underneath him. Adrian did brilliantly to thwart Abraham with his feet in extra time, but then was harshly adjudged to have impeded the 20-year-old in the area and was sat down by Jorginho's cool technique from the resulting spot-kick.

Adrian then denied Mason Mount late on before his moment of glory arrived. When the 32-year-old saved from Abraham in the shootout, grabbed his towel and slid to his knees awaiting the celebratory scrum from his teammates, it felt as though he was living somebody else's life.

Adrian's individual honour roll had read zero before that Super Cup trophy and only a few weeks earlier, he was training at semi-professional side Unión Deportiva Pilas in Spain's sixth tier, with personal goalkeeping coach Pedro Illanes and a physical trainer, to keep in shape after running down his contract at West Ham United.

He knew he would receive offers during the summer, especially from teams around Spain, and so made the decision to work out in his birthplace of Seville. Adrian was on the verge of accepting a proposal from Real Valladolid before a "bombshell" call from Liverpool considerably altered his trajectory.

By the end of last season it was clear that if Simon Mignolet departed Anfield in search of regular starts, the club would replace him with an equally experienced keeper to deputise for Alisson. Adrian was seen as the "perfect solution" (to borrow Klopp's description), having made 150 appearances during a six-year spell with West Ham. He was familiar with the demands of the league, had dealt with pressure situations and did not allow mistakes to affect him from week to week.

The club's homework on him was extensive: they had watched him at Real Betis and followed him with a closer eye when he moved to east London in 2013. They liked his anticipation, distribution and courage: he had huge character, which is an important element in an unforgiving position. When Club Brugge made Liverpool an offer totalling £8 million for Mignolet, a call was put into Adrian immediately to say he was the first choice to be Klopp's new No.2.

The "bombshell" conversation, as the keeper labelled it, came as a surprise: he was not expecting to return to England, especially to join the champions of Europe. There was no hesitation from Adrian once the offer came, only details to sort out: He offered apologies to Real Valladolid and two days before his Aug. 5 move to Merseyside, he informed Pilas' sporting director Jose Maria Moreno that he would no longer need to use their facilities. That goodbye was followed with a load of bags that contained his old kits, boots and other memorabilia as well as a handwritten letter and gift card.

"In gratitude for your hospitality and availability, I want to present UD Pilas with this voucher for sports materials and equipment to continue growing," it read. "Thank you so much for everything! I wish you all the best."

The gift certificate helped the club purchase 20 balls and other necessities for the season, the time spent with the goalie turning Moreno into a Liverpool fan. (The sporting director couldn't bear to watch the shootout against Chelsea, but went wild when his son told him Adrian had saved the decisive penalty to win the Super Cup.)

How Adrian performed in the Super Cup, despite not having time to prepare, was "incredible," according to the manager, who saluted him as a "proper personality in the dressing room as well."

A few hours later, however, Klopp was left sweating on his new "mentality monster," whose ankle was significantly swollen by the time he woke up. The keeper was immediately a doubt for Saturday's trip to Southampton; he'd been hurt when a spectator breached the barricade during the post-match celebrations in Istanbul and ran across the pitch to evade the security guards before slipping and clattering into the new Liverpool No.1.

On the four-and-a-half-hour flight back to Liverpool that Thursday afternoon, head physio Lee Nobes worked intensively on the affected area to ensure Adrian would pass a late fitness test to start at Southampton.

His hero status was eroded a little in the ensuing 2-1 win at St Mary's as his clearance from Virgil van Dijk's back pass ricocheted off Danny Ings' shin and into the net on 83 minutes after Sadio Mane and Roberto Firmino fired the Reds ahead, leading to a tense finish on the south coast.

Yet Klopp wasn't concerned, having watched Alisson's big mistake early on for Liverpool against Leicester City last season. After Saturday's match, he revealed he'd already cleared the air with his new keeper.

"Yes. I told him, 'You finally arrived, welcome!' Ali did the same. Obviously it's a goalie thing at Liverpool, no problem with that as long as we win the games. All good.

"Adrian had a swollen ankle and we played too many balls back to him in that period. I was happy with everything he did today, all the saves, all that stuff. The other players have to then feel more the responsibility for the build-up and cannot give all the balls back to him and hope the pain killers still help or whatever.

"I don't think the goal was because of that, but a few other balls were. He is completely good with his feet. If you would have seen his ankle on Thursday after we left the plane then you would say even the pass before the Southampton goal was better than you would have expected! It is all fine."

Liverpool are confident it won't impact him much, something also evidenced by his time at West Ham.

"How he reacts to the mistake, I think that is more important than the mistake itself," midfielder Georginio Wijnaldum said, before reminding that the new recruit has been "in for not even two weeks, so we have to get used to each other." It hasn't helped Adrian that he is between the posts for a Liverpool side that have been atypically open, allowing the opposition to create a high volume of chances this season.

Chelsea had 20 shots during the Super Cup, with 13 inside the box, while promoted side Norwich fired in 12 in total at Anfield, with eight coming inside the area. Nine of Southampton's 14 efforts were also from the 18-yard zone. With Arsenal next up and given their attacking weaponry -- Pierre-Emerick Aubameyang shared the league's Golden Boot with Mane and Mohamed Salah last season -- Liverpool will need to tighten up, but Adrian will know more than anyone that he needs to be prepared for everything.

As he put it himself after defeating Chelsea, "goalkeeper life is like this."