Coffee, but make it ~spooky~. 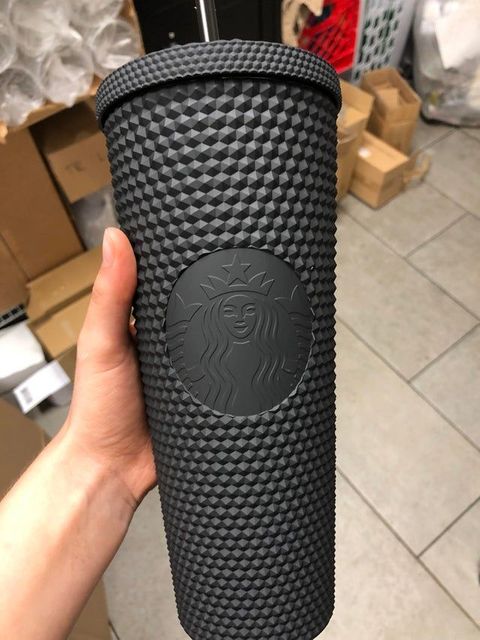 Your Starbucks tumbler says a lot about you as a person. For instance, if you choose this new, studded, matte black Starbucks cup, you're pretty much telling the world, "I am a badass witch who should not be spoken to until I've had my coffee."

The cup was first spotted and posted by Reddit user flwerp0wer on the r/Starbucks Reddit forum. It appears to be pretty large and features a very goth matte black design, the traditional Starbucks logo, and some ridges that look like studs or scales all over it. Basically, it's perfect for all of your Halloween needs, but I don't think you'd receive any judgement for breaking this one out now and embracing your inner summer goth.

According to comments on the post, this new cup is apparently set to debut in stores by the end of the month. Buuuuut according to photos, at least one Starbucks location has put them out already, so it's worth keeping your eyes peeled for the witchy goodness now.

If you can't find this cup at your location yet, there are plenty of other matte black tumblers on the market to suit your witchy spirit.

According to another photo posted by Instagram user @synthia72, the rest of the fall Starbucks cup range appears to include another matte tumbler, some reusable travel mugs that include the words "Coffee. Set. Go.," and a shiny purple travel mug that also gives off some serious Halloween vibes.

I can only imagine how many people will be filling these with iced Pumpkin Spice Lattes.