The five schools were closed in 2014 due to insecurity.

Advertisement
By KALUME KAZUNGU
More by this Author

The five primary schools in terror-prone Basuba Ward in Lamu County have finally been reopened, six years after they were deserted.

They include Milimani, Basuba, Mangai, Mararani and Kiangwe, all of which are inside the dense Boni Forest where a multi-agency security operation to flush out Al-Shabaab militants is ongoing.

The five schools were closed in 2014 due to the insecurity brought about by the terrorists.

On Wednesday, the county security committee led by Lamu County Commissioner Irungu Macharia and County Police Commander Muchangi Kioi accompanied the 10 teachers posted to the area in a ceremony to reopen the five institutions in the respective villages around Boni Forest.

Two teachers were posted to each school as the institutions will be offering learning starting from early childhood development education (ECDE) up to Grade Four.

Addressing the public during the event to reopen the schools in Mararani village, Mr Macharia said the government has done all it takes to ensure security for learners and locals in the affected areas.

Mr Macharia thanked the Teachers Service Commission (TSC) for ensuring that teachers are deployed to the schools.

"We thank TSC for their cooperation in ensuring teachers are posted to this place. We are with them here today as we reopen the institutions. As a security department, we will ensure optimum security for the teachers, pupils and even the locals here. Our happiness is to see things going back to normalcy here," said Macharia.

The county security boss also thanked the Ministry of Education for ensuring all the five schools are equipped with adequate learning materials.

Mr Kioi on his part encouraged parents in the five villages to send their children to the institutions so that they can learn.

He lashed out at parents who might fail to send their children to the schools, saying they have no reason to do so since security has fully been enhanced in the area.

According to Mr Kioi, Operation Linda Boni has greatly helped in reducing terrorist attacks and attempts by Al-Shabaab to infiltrate the region in recent times compared to previous years, particularly between 2014 and 2015.

"I can say it is almost a year and a half that has passed without any insecurity incident reported in Boni Forest villages thanks to the Linda Boni operation. As we reopen the schools, we will continue strengthening our resolve in order to completely end Al-Shabaab menace in this place so that people can go about their activities without any fear," said Mr Kioi.

He dismissed those claiming that security has not been restored.

"There is peace and stability in Basuba Ward. Those still claiming that these areas are insecure are deliberately doing so to mislead the public. There is nobody with a better understanding of the security of this area more than us the county security department. Therefore, when we say security is optimal, it’s just that. We have no reason to lie to the public. Therefore, the teachers posted here and the pupils and parents living here as well should rest assured that their security is guaranteed," he added.

Basuba Ward MCA Barissa Deko could not hide his joy after the government reopened the five schools.

Mr Deko said the move to reopen the Boni schools has come at a time when parents were really frustrated about the fate of their children, most of whom were staying at home instead of attending classes.

He appealed to the national government through TSC to consider recruiting more teachers, including Form Four leavers from the area and train them so that they can then be deployed to their own villages to teach once they qualify.

Mr Deko also insisted on the need for the government to rehabilitate the Mangai Boarding Primary School which was vandalised by Al-Shabaab in 2015.

"We're happy that our schools have finally been reopened after years of suffering. Parents were spending a fortune ferrying their children from Boni villages all the way to Mokowe Arid Zone Primary in Lamu West. At least our children can now study in their villages after the reopening of these schools. The government and TSC should also consider deploying more teachers here so that these schools can operate up to Class Eight," said Mr Deko.

Mrs Fatma Shizo, an elder from Kiangwe village, termed the reopening of the five schools as a new dawn for the Boni minority community.

Mrs Shizo thanked the national government for the ongoing crackdown on criminals in Boni Forest, saying the operation has totally helped in bringing peace and stability in the entire Basuba Ward.

"We are happy that our region is now enjoying peace. I am more than contended with the reopening of our five primary schools today. This is a new dawn for the entire community as our children can now learn while within their villages," said Mrs Shizo.

Lecturers to down tools on January 20

Meru, Isiolo residents panic even as government officials say no cause for alarm

"You are not boarding": Miguna Miguna kicked out of plane in France

#Past10s: In the past ten years, budget, debt have risen significantly

DPP proposes that traffic police officers should have body cameras 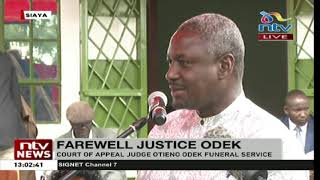