Ruto says aim is to stop impending eviction of 60,000 families.

Advertisement
By VITALIS KIMUTAI
More by this Author

Chama Cha Mashinani (CCM) party leader Isaac Ruto has revealed that a delegation of Rift Valley leaders he led on separate occasions to meet ODM leader Raila Odinga and Kanu Chairman Gideon Moi was aimed at finding a lasting solution to the settlement of families living along Mau Forest.

The former Bomet governor said the leaders will continue engaging other prominent leaders in a bid to avert an impending eviction of 60,000 families in phase two of the exercise by government security agencies.

"The families affected are settled in a block that belonged to group ranches. The land is not part of the 22 blocks forming Mau Forest complex," said Mr Ruto.

He added, "We will be seeking a meeting with Maasai elders and their elected leaders as it is only through dialogue that we can resolve this emotive issue without punishing innocent people including children."

The delegation included former MPs Zakayo Cheruiyot, Musa Sirma, Paul Sang and a section of elders from the Kalenjin community.

The outspoken politician made the remarks during an interview on Citizen TV on Tuesday night.

Environment Cabinet Secretary Keriako Tobiko and Rift Valley Regional Commissioner George Natembeya have separately stated that families settled around the forest would be evicted to pave way for conservation of the regional water tower.

Mr Ruto at the same time revealed that he led his CCM party in ditching the opposition National Supper Alliance coalition after it became apparent that his co-principals rooted for "disputing of election results, forming a parallel government and swearing in a people's president".

"CCM supported President Uhuru Kenyatta and Deputy President William Ruto in the 2017 presidential runoff so as to avert chaos and bloodshed in the country especially as a result of experience with the violence and killings that rocked the nation [after] the 2007 polls," said Mr Ruto.

“It was in the same vein that ANC leader Musalia Mudavadi and Wiper leader Kalonzo Musyoka did not attend the parallel and controversial swearing-in (of Mr Odinga) at Uhuru Park," he added.

The former governor said there are aspects that are good in the Punguza Mizigo initiative being fronted by Dr Ekuru Aukot but he does not support the proposals to reduce the number of women legislators and constituencies in the country. 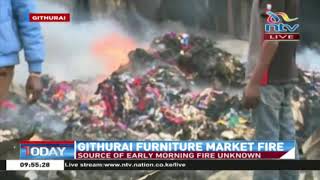