He argues that the affordable housing project is a strategy of tackling poverty.

Opposition leader Raila Odinga’s amplified role in the government is puzzling to many and has increasingly become a source of discomfort in Deputy President William Ruto’s camp.

The African Union’s High Representative for Infrastructure Development is lately enjoying delegated authority by President Uhuru Kenyatta, and has been meeting Cabinet secretaries, launching government projects and consulting the Head of State frequently.

However, Mr Odinga’s spokesman Dennis Onyango maintains the ODM leader “is not an employee of the government”.

According to Mr Onyango, Mr Odinga “is only helping the country get past its bitter divisions and to move forward in line with his agreement with President Kenyatta”.

Mr Odinga, who made his way to the venue right after jetting back into the country from Addis Ababa, Ethiopia, was welcomed to the venue by Kiambu’s top security personnel headed by County Commissioner Wilson Wanyanga.

Mr Odinga had attended a conference on infrastructure under the Belt and Road Initiative in Ethiopia.

After conducting an aerial tour of the development, he was walked to the VIPs area for a short briefing on the project’s status before making his way to the venue at about noon, an hour after the scheduled start off time.

When he rose to speak, he said his visit was one of the fruits of the handshake.

“I bring you greetings from the President. I told him I am coming here. He knows I am here and he sent blessings for this project,” he said.

He outlined the issues the government is working on to enable coexistence among Kenyans.

“We want to change how some things are run. We have repeatedly said so many times that corruption is an animal we are going to deal with irrespective of who is committing it,” he said.

According to him, the levy should be seen not as a means to overtax Kenyans, but as an investment that would enable many to fulfil their dreams of owning homes.

“It has worked in other countries like Malaysia, where six per cent of the entire population live in such houses. This is how we can move our people from poverty. Housing is one of the rights in our Constitution,” he added.

His elevated status in government appears to be causing some discomfort within Dr Ruto’s camp.

Pokot South MP David Pkosing views Mr Odinga’s “hanging around the President” as nursing hopes of being endorsed for presidency in the 2022 polls.

“This is a serious miscalculation because the politics of endorsement has a history of failure in this country.”

In the meantime, Mr Odinga’s public assignments continue to raise interest and panic.

The kind of collaboration that saw Mr Odinga received by a host of senior government officials at Tatu City on Friday has over the time become the norm, with government ministers and governors paying visits to his Upper Hill private offices.

The opposite is the case in Dr Ruto’s frequent tours across the country. For instance, that same Friday, there was no top government official in sight when he visited Kisii and Nyamira counties for various events.

In February, Mr Odinga held a meeting with Cabinet secretaries.

The ministers were charting out a multisectoral team drawn from both the local and national governments aimed at addressing water hyacinth menace in Lake Victoria, among other development needs in Nyanza region.

“Lest we forget, Hon Odinga is AU’s High Representative on Infrastructure and we cannot ignore this fact and fail to consult with a man whose docket means a lot to the rest of Africa simply because he is in a rival political camp.”

He also dismisses the notion of 'elevated role'. “Security for Raila, as a former PM, is an entitlement, according to our statutes. He was only being mistreated in the campaign period.

“The decision of the symbolic handshake with Mr Odinga is persuaded by the Raila-Kibaki handshake to end bloody political violence, revive the economy and political systems in the country through a new Constitution,” adds Prof Peter Kagwanja in reference to the 2007 presidential poll impasse that led to the formation of a Grand Coalition Government.

“The thinking that President Kenyatta is roping in the former Prime Minister into government as part of the 2022 succession plot is myopic. The polls of 2022 will come and go, but Kenyatta is focused on a bigger picture beyond 2022 and beyond political ambitions individuals, including his very own deputy, Ruto,” says Prof Kagwanja.

However, ex-Cabinet minister Amukowa Anangwe thinks differently. “The unstructured dalliance between Uhuru and Raila is extra-constitutional and a marriage of convenience. It is a political arrangement between the two on a quid-pro-quo basis that is characterised by mutual exchange of favours, material or otherwise.”

But Mr Odinga’s spokesman maintains the Kenyatta-Odinga deal is not for political expediency.

Mr Onyango explains that the President has freed his officials to consult and work with Mr Odinga should need arise.

Occasionally the President has asked the ODM leader to take up certain responsibilities on his behalf, which he has agreed to.

Inside the ugly conflict at KRA

Recent arrest of staff is said to have triggered a go-slow that is grinding services to a halt.

China: Huawei not a military company

Zarika to defend WBC title against Mexican or Zambian

DP Ruto Vs Raila Odinga: Truce that never was? 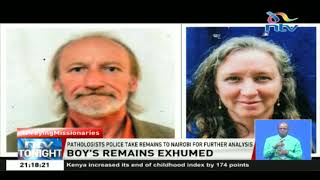